Lawrence Kettle: The UK’s Referendum on EU Membership: The debates and the consequences of a Brexit, AIES Fokus 1/2016 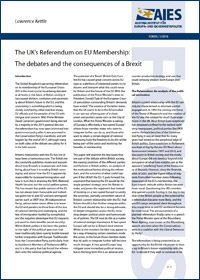 The United Kingdom’s upcoming referendum on its membership of the European Union (EU) is the most crucial issue being debated at all levels in the fabric of British society. It has caused division, confusion and uncertain­ty about Britain’s future in the EU, and this un­certainty is something which is being closely watched by other member states, EU officials and the peoples of the EU with intrigue and concern. With Prime Minister David Cameron’s government being elected by a majority in the 2015 general election the referendum has now been enshrined into government policy after it was promised in the Conservative Party’s manifesto, and will happen by the end of 2017; although many on both sides of the debate are calling for it to be held sooner.