What future for the Eastern Partnership?

Velina Tchakarova: What future for the Eastern Partnership? More than a partnership, less than a membership, AIES Fokus 5/2015 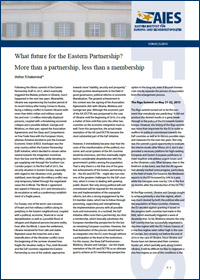 Following the Vilnius summit of the Eastern Partnership (EaP) in 2013, which eventually triggered the Maidan protests in Ukraine, much happened in the next two years. Meanwhile, Ukraine was experiencing the hardest period of its recent history after losing Crimea to Russia, facing a military conflict in Eastern Ukraine (with more than 9000 civilian and military casualties and over 1.3 million internally displaced persons), coupled with a threatening economic collapse and a possible default. Georgia and Moldova, on their part, signed the Association Agreements and the Deep and Comprehensive Free Trade Area with the European Union, whereas Armenia decided to join the Eurasian Economic Union (EAEU). Azerbaijan was the only country within the Eastern Partnership (EaP) initiative, which decided to remain rather neutral towards the integration incentives from the East and the West, while elevating its gas supplying role through the Southern Gas Corridor project. In the first half of 2015, the security situation in Eastern Europe, especially with regard to the Ukrainian crisis, partially stabilized, even though the military conflict was only temporary halted through the negotiated cease-fire in Minsk. The Minsk 2 agreement was signed in February 2015 and introduced a de-escalation as well as a preliminary establishment of a fragile peace.