Iryna Mikhnovets: Moldova, Ukraine and Georgia: what has been done after the decisive Eastern Partnership, AIES Fokus 4/2015 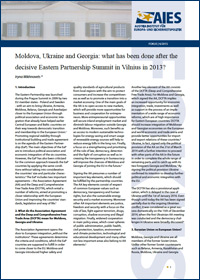 The Eastern Partnership was launched during the Prague Summit in 2009 by two EU member states - Poland and Sweden - with an aim to bring Ukraine, Armenia, Moldova, Belarus, Georgia and Azerbaijan closer to the European Union through political association and economic integration that already have helped earlier Central European and Baltic countries on their way towards democratic transition and membership in the European Union. Promoting regional stability through institutional building and trade agreement is on the agenda of the Eastern Partnership (EaP). The main objectives of the EaP are to introduce political association and economic integration of the six countries. However, the EaP has also been criticized for the common approach towards the EaP countries by applying the same conditions without taking into consideration the countries´ size and particular characteristics. The EaP includes two important agreements – the Association Agreement (AA) and the Deep and Comprehensive Free Trade Area (DCFTA), which entail a number of reforms, aimed at promoting a closer relationship with the European Union and improving the countries' standards, legislation and way of life.