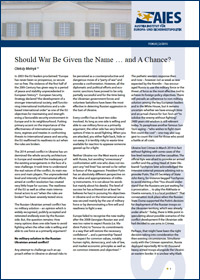 In 2003 the EU leaders proclaimed: “Europe has never been so prosperous, so secure nor so free. The violence of the first half of the 20th Century has given way to a period of peace and stability unprecedented in European history”. European Security Strategy declared “the development of a stronger international society, well functioning international institutions and a rule-based international order” as one of the EU objectives for maintaining and strengthening a favourable security environment in Europe and in its neighbourhood. Putting primary accent on the importance of the effectiveness of international organisations, regimes and treaties in confronting threats to international peace and security, the EU reaffirmed its readiness to act when the rules are broken.

The 2014 armed conflict in Ukraine has undermined the whole security architecture in Europe and revealed the inadequacy of the existing arrangements in the face of a new challenge. It took time to understand the real nature of the conflict, its main reasons and main players. The unprecedented level and intensity of international efforts aimed at conflict resolution has created very little hope for success. The readiness of the EU as well as other main international actors to act “when the rules are broken” has been severely tested since.

The Russian-Ukrainian armed conflict has no military solution – an opinion which is widely recognised, publicly accepted and reiterated endlessly even by the Russian side. But, the question remains: How many options does one side have to avoid fighting when the other side is willing and able to use force as a primarily argument?