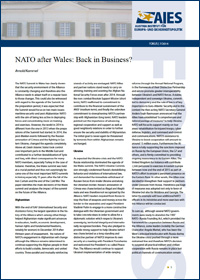 The NATO Summit in Wales has clearly shown that the security environment of the Alliance is constantly changing and therefore also the Alliance needs to adapt itself on a regular basis to those changes. This could also be witnessed with regard to the agenda of the Summit. In the preparation period, it was expected that the Summit would focus on two main issues: maritime security and post-Afghanistan NATO with the aim of being less active in deploying forces and concentrating more on training and exercises. However, the world in 2014 is different from the one in 2013 when the preparations of the Summit had started. In 2014, the post-Maidan events followed by the Russian annexation of Crimea and the fighting in Eastern Ukraine, changed the agenda completely. Above all, Daish (Islamic State) took control over important parts in the Middle East and contributed to a further destabilization of Syria and Iraq, with direct consequences for many NATO members, especially Turkey in the case of Kobanê. Therefore, the Wales summit was held at a crucial period and thus not surprisingly became one of the most important NATO summits in history especially 25 years after the fall of the Iron Curtain and the end of the Cold War. The paper identifies the main decisions of the Wales summit and analyses the impact of the summit on the future of the Alliance.