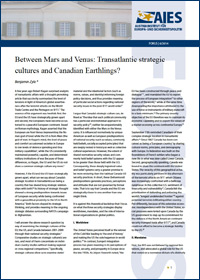 A few years ago Robert Kagan surprised analysts of transatlantic affairs with a thought-provoking article that succinctly summarized the level of tensions in light of America’s global assertiveness after the terrorist attacks on the World Trade Centre and the Pentagon on 9/11. The essence of his argument was twofold: first, the EU and the US have strategically grown apart and second, the Europeans have become accustomed to a peaceful European continent. Based on Roman mythology, Kagan asserted that the European are from Venus (representing the Roman god of love) while the US is from Mars (the god of war). In Kagan’s mind, the level of peace and comfort accustomed societies in Europe to low levels of defence spending and thus military capabilities, while the US consistently maintained powerful, capable, and determined military institutions of war. Because of these differences, so Kagan, the EU and the US do not share a common strategic culture any more.

However, if the EU and the US have strategically grown apart, what can we say about Canada’s strategic location in transatlantica as being a country that has shared long strategic relationships with both? Its history of strategic thought showed a strong predisposition towards issues of European security while being confronted with a geopolitical proximity to the US in North America.5 Both factors shaped its strategic thinking, and provides meaning to the ongoing strategic debates surrounding NATO’s campaign in Afghanistan.