The Conflict between Israelis and Palestinians 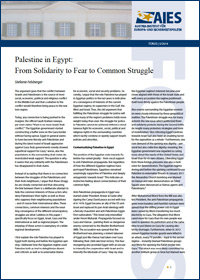 The argument goes that the conflict between Israelis and Palestinians is the source of most social, economic, political and religious conflict in the Middle East and that a solution to the conflict would therefore bring peace to the war-torn region.

Today, any connection is being pushed to the margins: the official Saudi Arabian newspaper even claims “there is no more Israeli-Arab conflict.”1 The Egyptian government started constructing a buffer zone on the Gaza border without facing uproar. Egypt in general seems to have become fiercely anti-Palestinian and during the latest round of Israeli aggression against Gaza Arab governments merely showed superficial support for Gaza;2 worse, also the populations in the surrounding Arab states demonstrated weak support. The question is why it seems that any solidarity with the Palestinians has disappeared in Arab states.

Instead of accepting that there is no connection between the struggles of the Palestinians and their Arab neighbours, I argue that these struggles are closely connected and that obscuring the link between them is a deliberate attempt to hide the common interests of those actors who deny Palestinians’ their rights as well as those who suppress their neighbouring populations – and of course their international allies. These connections, common interests and the resulting convergence of the different emancipatory struggles are what I address in this paper. I specifically focus on Egypt, Israel, Gaza and the international as well as regional players. The interplay of these actors is exemplary of a wider regional development.