Croatia and the CSDP 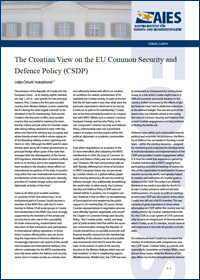 The entrance of the Republic of Croatia into the European Union – as its twenty-eighth member (on July 1, 2013) – was specific for two principal reasons. First, Croatia is the first post-socialist country from Western Balkans (a term created by the EU during the 2000 Zagreb Summit)1 to be admitted to the EU membership. And second, Croatia is the first post-conflict, post-socialist country that succeeded in meeting the membership criteria and join other EU member states after being military attacked in early 1990-ties, when one third of its territory was occupied, and where bloody armed conflicts where raging until the liberating military actions Lightning and Storm in 1995. Although the NATO and EU membership were set by all Croatian governments as principal foreign affairs goals of the state that emerged after the disintegration of the former SFR Yugoslavia, intensification of armed conflicts both on its territory and in the neighborhood have resulted in the situation where efforts on international recognition of the state, its positioning within the new international environment, and liberation of the country became, naturally, priorities of Croatian foreign policy and overall diplomatic activities of the time.