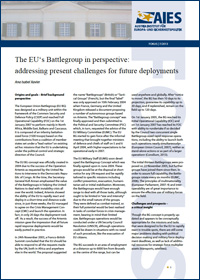 The European Union Battlegroup (EU BG) was designed as a military unit within the framework of the Common Security and Defence Policy (CSDP) and reached Full Operational Capability (FOC) on the 1st January 2007 to perform mainly in North Africa, Middle East, Balkans and Caucasus. It is composed of an infantry battalion-sized force (1500 troops) based on the contributions from a coalition of member states set under a “lead nation” on existing ad hoc missions that the EU is undertaking under the political control and strategic direction of the Council.