AIES Fokus 2/2013: CSDP on the agenda of Visegrad cooperation

Csaba Törő: CSDP on the agenda of Visegrad cooperation – An increasingly important and practical instrument in a Central European concert, AIES Fokus 2/2013. 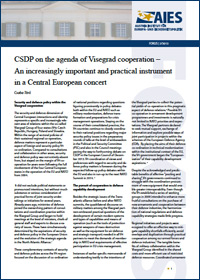 The security and defence dimension of Central European interactions and identity represents a specific and increasingly relevant area of relations within the so-called Visegrad Group of four states (V4): Czech Republic, Hungary, Poland and Slovakia. Within the range of sectoral policies of their sustained regional co-operation, defence matters represent a particular aspect of foreign and security policy V4 co-ordination. Compared to consultations and collaboration in other areas, security and defence policy was not entirely absent from, but stayed on the margin of V4 cooperation for years even following the full involvement of the four Central European states in the operation of the EU and NATO from 2004.