Peaceful protest in Egypt under Mubarak

Stefanie Felsberger: The emergence of peaceful protest in Egypt under Mubarak, Observer: A Journal on threatened Human Rights Defenders in the Philippines, Volume 4, Number 1, 2012 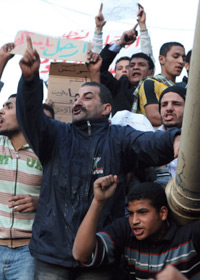 The wave of protest in December 2010 which eventually led to the ousting of the Tunisian President Ben Ali caught most analysts, scholars, politicians and journalists off guard and even after Ben Ali had been forced out of office in January 2011 most experts considered the Tunisian Revolution an isolated event. Such a strong call for democracy and change was regarded as most unlikely if not impossible in Arab countries and especially change by means of popular and peaceful protest was seen as the least achievable. In this paper I shall argue that, firstly, the idea that Islam and democracy are incompatible and secondly, the focus on elite politics and the simultaneous disregard for social movements distorted the analysis of the state of affairs in Egypt.