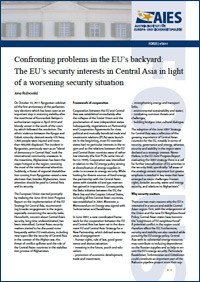 On October 10, 2011 Kyrgyzstan celebrated the first anniversary of the parliamentary elections which has been seen as an important step in restoring stability after the overthrow of Kurmanbek Bakiyev's authoritarian regime in April 2010 and bloody unrest in the south of the country which followed the revolution. The ethnic violence between the Kyrgyz and Uzbek minority claimed nearly 470 lives; 1,900 people were injured and more than 400,000 displaced. The incident in Kyrgyzstan, previously seen as an „island of democracy in Central Asia“, took the international community unawares. In the meantime, Afghanistan has been the major hotspot in the region, receiving the most of the international attention. Suddenly, a threat of regional destabilisation coming from Kyrgyzstan raised a new alertness that, besides Afghanistan, more attention should be paid to Central Asia and its security. The European Union reacted promptly by realising the June 2010 Joint Progress Report on the implementation of the EU Strategy for Central Asia, recommending broader engagement in the region, especially concerning the security tasks.