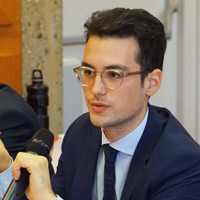 After graduating from University College London with a B.A. (Hons) in Politics and East European Studies, a thesis on Sino-Russian relations in Central Asia and several stays in China, Adam Urosevic served at the Austrian National Defence Academy and worked as an educational consultant in Moscow. In 2017, he graduated from Sciences Po Paris with an M.A. in International Public Management, focusing on post-Soviet foreign and security policy as well as political economy and international public law. He speaks German, English, French, Russian, and Serbo-Croatian fluently as well as intermediate Mandarin.

Adam has worked for the Austrian Permanent Mission to the UN on nuclear security and proliferation matters, for a political risk consultancy on investment-related rule of law issues in the Western Balkans and, most recently, in the cabinet of the European Commissioner for Neighbourhood Policy and Enlargement Negotiations.

As of May 2019, Adam supports the AIES with research on China's foreign and security policy.