AIES Senior Advisor and Board Member 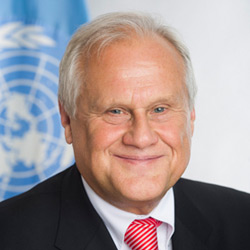 The AIES is pleased to welcome Ambassador Dr. Martin Sajdik as AIES Board Member and Senior Advisor.

His diplomatic career took Martin Sajdik to Belgrade, Nairobi and Geneva and from 1991 as envoy to the Austrian Embassy in Moscow. In 1997, he was appointed head of the Department for EU Enlargement, External Economic Relations and Central, Eastern and South-Eastern Europe. In 2003 he was appointed head of the economic and integration policy section in the Ministry for Foreign Affairs. From 2007 to 2011 he was Austrian Ambassador to the People's Republic of China, North Korea and Mongolia, and from 2012 to 2015 Ambassador to the United Nations in New York. From 2015 to 2020, Ambassador Sajdik was the OSCE Ukraine Special Envoy. In the late 1980s and early 1990s, Martin Sajdik was also Head of the Moscow Representative Office of Creditanstalt-Bankverein and Managing Director of the Maculan Group.