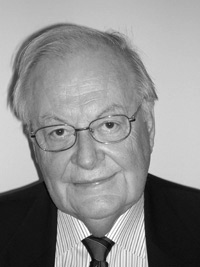 The AIES mourns the death of its founding director Ambassador Dr. Erich Hochleitner

Erich Hochleitner was born in Vienna on 24th of July 1930 and holds a doctorate in law from the University of Vienna. In addition, he received a degree from Stanford University, which he completed with a Master of Arts in Economics.

On his initiative, the Austrian Institute for European and Security Policy (AIES) was founded in September 1996. As the founding director of the institute, Ambassador Hochleitner has written numerous publications on topics related to the European foreign, security and defense policy. Ambassador Hochleitner has always been a committed facilitator of the European integration efforts.

We offer our condolences to his companions and especially to his family members.