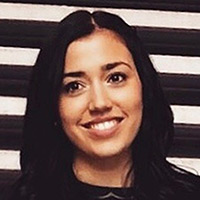 Gabriela joined the AIES in September 2020 as Associate Fellow. She holds a Bachelor's degree in Hungarian Studies (BA) and a Master of European Studies (M.E.S.) from the University of Vienna, as well as a Master of Political Science (MSc.) from the University of Amsterdam. During her studies, she focused on European politics, policies and external relations, the European eastern and southern neighbourhood, conflict resolution, as well as international and human security.

In the past, Gabriela completed several internships. Amongst others, she worked as programme intern at a Human Rights Foundation in Washington D.C., as political affairs intern the United Nations Secretariat in New York, and as policy analyst trainee at the European Parliament in Brussels.

Her interests include European Politics, the European neighbourhood, conflict transformation and peacebuilding, as well as international and human security.