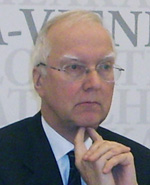 Franz Cede studied Law in Innsbruck and holds a Doctor of Law degree of the University of Innsbruck. He worked then as a teaching assistant at the Institute for Politics and Public Law before leaving for Bologna and Washington where he studied International Relations and holds a Master's degree.

In 2007 Ambassador Cede was appointed Senior Advisor at the Austrian Institute for European and Security Policy (AIES). Furthermore he teaches as Professor for Diplomacy at the Andrassy-University in Budapest.

Franz Cede has published several books and articles related to International Public Law, Security Policy and European Law and is a well-known expert as regards the relationship between Russia and the EU.